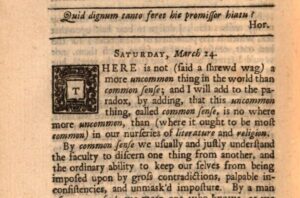 Page from “Terra-Filius” by Nicholas Amhurst (writing in March 1725): “There is not (…) a more uncommon thing in the world than common sense (…)”.

How much “Common Sense” have you got?

Appeals are made by both government and people closer to home to “use your common sense”. The United Kingdom, this beautiful country I live in, seems to be divided as to whether the British public has or has not got any. Let alone the government that is in charge.

Noble Prize laureate Daniel Kahneman wrote his international bestseller about it. His book “Thinking Fast and Slow” is an interesting read about rationality and irrationality behind the decisions and choices we make every day.

A Definition of Common Sense

Having sound judgement and being able to use your common sense is something we all aspire to. Thinking back, I can almost hear my father impress upon me: “Use your common sense!”. Perhaps it’s no surprise then that in the United Kingdom, or certainly England, were all urged to use it in these current difficult times. At the same time, we might feel flattered being given the benefit of the doubt as to whether we possess much of it. …”Use your common sense!” The implication is you actual possess it.

You then wonder what good judgement relies on. It is experience? Intelligence? Fairness of approach; or curiosity? Believe in a God (my God or yours…)?

Common Sense: Harder to Have than is Generally Thought

Forget measuring logical reasoning, emotional intelligence, engagement, communication skills and cognitive bias. The gap is staring at us: we need to measure common sense and start predicting what kind of person has a lot of common sense and where we might find them. Could it be that there are some clever tell-tale signs of how much common sense someone has?

Charlie Munger (Warren Buffet’s longstanding business partner – look them both up if you haven’t yet; they are interesting characters) put it well at the 2019 Annual Meeting of his Daily Journal: “(…) we [advise] some combination of some basic morality and sturdy common sense (…) every time you hear that someone has a lot of common sense, it means that he has uncommon sense, and it is much harder to have common sense than is generally thought.”

Having good judgment is important – but be careful (be ‘alert’…) to realise that it is fraught with complexity, subjectivity and ‘hidden’ dynamics that shape it.

We all like to feel that were in control of our actions and the consequences, master our own fate. We want to believe that we have good judgement that will help us behave in a way that is reasonable and effective. But we’re all susceptible to outside influences that change our behaviour, despite our “common sense”.

Clever marketing and canvassing activity can change our purchasing behaviour. Richard Thaler and Cass Sunstein, in their book “Nudge; Improving Decisions About Health, Wealth and Happiness”, discuss some fascinating examples that show how voting behaviour can be significantly influenced by merely asking people how they expect to vote just before an election. The design and the display of the checkout page on your online shopping screen has a significant influence on whether you leave your laden shopping cart behind and leave (!), or actually click to buy, and then how much and how frequently you spend.

The way things are presented to you and ‘framed’ unconsciously influences your behaviour and your unspoken judgement that leads to that behaviour.

One of the important aspects of “common sense” is that our behaviours are governed by thinking and “cognitive perception” processes that we are not very well aware of. We are often on auto-pilot, and we go by what ‘seems’ to be. And it is this that makes it harder to understand what make good sense and what doesn’t. Linked to this, this common sense makes justifying our actions and omissions afterwards even harder.

How to Use Your Common Sense

Below, I give my advice, ‘mashed up’ with my opinion, on how to use common sense:

In other words: be careful to rely too easily on your own common sense – let alone appealing to others to use theirs. In some circumstances it might not be the most sensible thing to do.

Post-scriptum: “Common Sense” is a notion that has been debated for centuries. In early 1776, corsetmaker Thomas Paine sold over 120,00 copies of his best-selling and influential pamphlet of the American Revolution called “Common Sense”. The pamphlet was popular not because of its subtlety of argument, but because it was passionate, simple in style, it spoke to the common man and was ‘disruptive’. It urged the ‘rebellious’ American colonies to declare independence and establish their own form of republican government. Paine’s pamphplet helped to radicalize many Americans and pushing them to seriously consider the idea of declaring independence from Britain. It reminds me, somehow, of what I see to be some disunity in the United Kingdom of today.

Share on TwitterShare on FacebookShare on LinkedInShare on E-mail

Talk is good – here’s how to get in touch

Join & be a part of our social community

Keep up to date

With the latest news from People Business Psychology